Cultus Lake, British Columbia is a popular summer recreational destination for people who live in the Metro Vancouver area. It is located 11 km southwest of Chilliwack, BC, and is roughly a one hour and forty-five-minute drive from downtown Vancouver when the traffic is good. 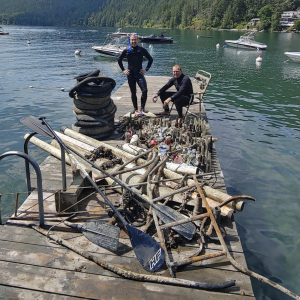 All of the summer visitors to the area take a toll on the environment in and around Cultus Lake. Recently,  recognizing that the lake needed a bit of a clean up and also wondering what kind of treasure they might find, Clayton Helkenberg (right)  and Steve Clegg (left) volunteered their time to do a little cleanup free diving in the lake.

“I [Clayton] live in Chilliwack B.C and I love to swim and free-dive in my local lakes and rivers to find what has been lost and clean up what I can. I have been able to return things to the owners who had never thought they would see their item again which is an awesome feeling! Instagram @ Aquatic__Monkey. 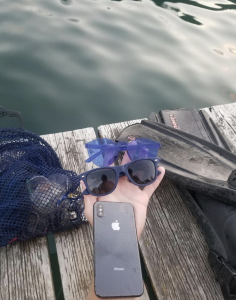 We contacted Clayton who has given a nickname to his trash and treasure hobby on social media, “Aquatic Monkey.” Clayton said “It’s just a hobby. [Aquatic Monkey] was kind of a joke nickname started by my friend and I kind of went with it. I have done this kind of stuff since I was a kid but got inspired [by] some of the bigger Youtube guys to start filming. Steve is definitely all about the environment [and] I’m a little more interested in finding ‘treasures’ but I pick up garbage when I see it.’

Pictures of trash probably aren’t exactly what you want to see on a blog but they give you some idea of the amount of litter and trash and lost items like, sunglasses and cell phones, that end up in the lake. As you can see from the photos Clayton and Steve collected quite a haul. Judging by the response on their Facebook page their actions were greatly appreciated by numerous people who were also a little appalled at some people’s lack of respect for the environment. 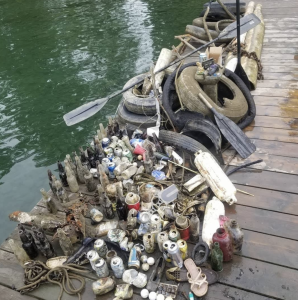 From Aquatic Monkey’s Instagram: “What a trash haul from #cultuslake today. A total of 165 cans/bottles, and 535lb of trash. Local residents were super thankful and gave us each a bottle of wine! @justabitfarther @taylorshaiphotography @hgodbout”

“I [Clayton] live in Chilliwack B.C and I love to swim and free-dive in my local lakes and rivers to find what has been lost and clean up what I can. I have been able to return things to the owners who had never thought they would see their item again which is an awesome feeling! Follow me on Instagram @ aquatic__monkey.

Trash is a sign of neglect and disregard for nature. It can have an impact on aquatic plants, The reproductive behavior of fish, and other animals.  It depletes the water of oxygen as waste decomposes. Also, toxic materials can leak or leach out of certain kinds of trash.

Thank you, Clayton, and Steve for helping to clean-up Cultus Lake.

The Langley City Community Market That Gives Back

Why Houston Trail Has A Special Place In My Heart

Things To Do On The 2020 BC Day Long Weekend